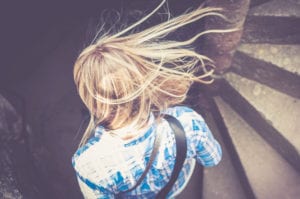 Though only 8 years old, Ali had been sexually exploited and severely abused by family and community members. Violence and drug use were a norm. When she began therapy, her group behavior was disruptive, and she had spells of inconsolable crying.

Ali believed that everyone who expressed care for her would eventually hurt her. The only stability in her life was her one-hour weekly counseling session, where she could be seen, heard, believed, and cared about.

Ali expressed herself through art and used this to work through her struggles. As she became more comfortable in counseling, her artistic expression shifted from chaotic to recognizable shapes and patterns. Eventually, Ali was able to acknowledge that the abuse was not her fault. She no longer hurt her body and replaced negative self-talk with positive affirmations.

When asked about her hopes for her future, Ali responded, “I want to be a momma so I can teach (my) kids what my mom didn’t know, that love is not supposed to hurt, love helps you rest, and love makes you safe.”

Ali is now on her way towards creating a healthy life for herself and for her future relationships.