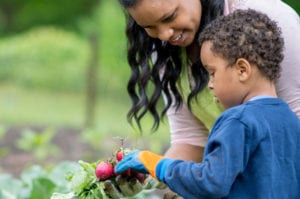 Five-year-old Daryl was recovering from severe maltreatment, and he struggled to adapt to new and different activities, such as gardening.

Because he refused to engage in the gardening activity, Daryl was supported in doing familiar activities inside while his friends were out in the garden. Each day, Morrison staff tried to lure him outside, telling him about earthworms and ladybugs, or the seeds that everyone was going to plant.

One day, after many months, the program was short-staffed, and no one was available to care for Daryl during garden time. The remaining staff were able to coax him outside, allowing him to just sit and observe. Soon, Daryl was excitedly running between plants, asking questions, and enthusiastically participating in harvest-time.

Daryl was thrilled with the fresh salsa-making activity. Before, he would have been too shy to share anything with a large group.

This once sullen and withdrawn little boy no longer needs encouragement to join the garden, only coaxing to leave it when garden time is over.